Spotlight on the Atkinsons 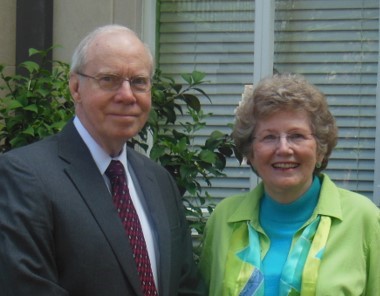 This week the Vineville Spotlight is on Wanda and John Atkinson.

Although Wanda and John both grew up in Macon, they didn’t meet each other until a mutual friend arranged a blind date in Augusta.  John, who had finished Duke Medical School and had served two years in the Navy, had moved back to Augusta to begin his internal medicine residency at the Medical College of Georgia.  Wanda had graduated from UGA School of Social Work and was working at Gracewood State School and Hospital.  In
September, they will celebrate their 44th anniversary!

When they returned to Macon in 1975, Wanda joined Vineville where John had grown up.  His lifelong ties to Vineville include the following: John’s great-uncle was Rev. Edmund Cook, pastor of Vineville from 1927-1933. The Ed Cook Sunday School class was named in honor of him. Betty Lawrence is John’s first cousin and a longtime member of the Mack Anthony class. The late Mallory Cook Atkinson, Jr., who taught for many years in the Parlor class, was also a first cousin. Since Rev. Allen Sanders had been John’s youth leader years earlier, they
joined the Allen Sanders Fellowship Class where they
met other young couples who have become their lifelong friends.
John enjoys singing in the Chancel and Daybreak choirs.  Wanda attends the 11 o’clock services, is active as a greeter, and involved in UMW activities.  They both enjoy the Tuesday luncheons and afterwards perform their weekly “pew patrol” duties in the sanctuary.

John practiced Internal Medicine for many years in Macon while Wanda kept busy with their 2 boys.  Since retirement, they enjoy exercising frequently at the Wellness Center.  John has been participating in the Wesleyan Academy for Lifelong Learning program for the past several years.  John and Wanda are the proud parents of two grown sons, both of whom live in the Atlanta area with their families.  They are most proud of their five grandchildren ranging in age from 12 years to 3 months.