Spotlight on the Argos 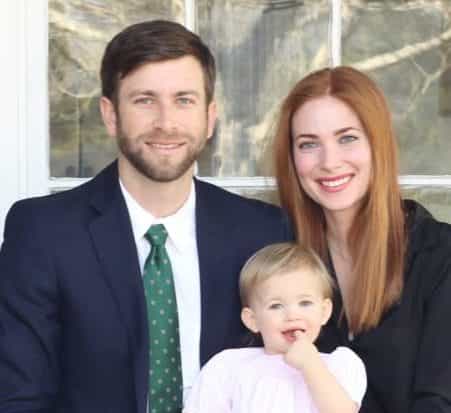 This week’s Vineville Spotlight is on Watson, Emmy, and Mary Alice Argo.

Which worship service and Sunday School Class do you attend? 11 o’clock and Disciples Class

How long have you been a member of the church? Watson has been attending VUMC since birth and joined the church at confirmation. Emmy joined in 2015

What are some things your family likes to do together or what are your hobbies? Just being together as a family, playing with Mary Alice, traveling, and spending time in Amelia Island with family. Emmy enjoys gardening and Watson enjoys woodworking and playing golf.

Tell us a little about your family. Emmy is originally from Dublin. Watson was born and raised in Macon. We met in college at the University of Georgia and began dating our sophomore year.  We married in 2011 at First Baptist Church in Dublin and welcomed our first child, Mary Alice, in 2016.

What’s the best vacation you’ve been on? We traveled to France and Italy in 2014, visiting Paris, the South of France, Florence, and Rome. Highlights of the trip were visiting Versailles, remote cathedrals, seeing Michelangelo’s statue of David, and climbing to the top of the dome at St. Peter’s Basilica.

What attracted you to Vineville or what is your favorite thing about Vineville? We were initially drawn to Vineville envisioning raising our children in a church surrounded by family members. Over the past few years, we’ve discovered there are many things about Vineville we love besides a family history here, including fellowshipping with the wonderful members of our Sunday school class, the beautiful services in the sanctuary, the ways in which our congregation reaches out into our community, and much more. We’ve enjoyed being involved in Rebuilding Macon and VBS. We also love the front row of the balcony- that’s our spot!

What do you do for a living? Watson, owner and operator of Argo Moore Landscapes, designs and installs residential and commercial landscapes, including the new gardens here at Vineville Methodist. Emmy has a degree in education and previously taught Spanish at Stratford but now stays home with Mary Alice.

What are a few of your favorite books/and or movies? Some of Emmy’s favorite books are Gone with the Wind, Redeeming Love, East of Eden and she is slightly obsessed with Downton Abbey —lol. Watson is a big fan of Steve Martin, and he also loved the book Unbroken.

What’s a little known fact about you that might surprise readers? Emmy has starred in some TV commercials and a few small film and television roles. Watson, a bit of a craftsman, loves to build things from pieces of furniture in the workshop in the back yard.