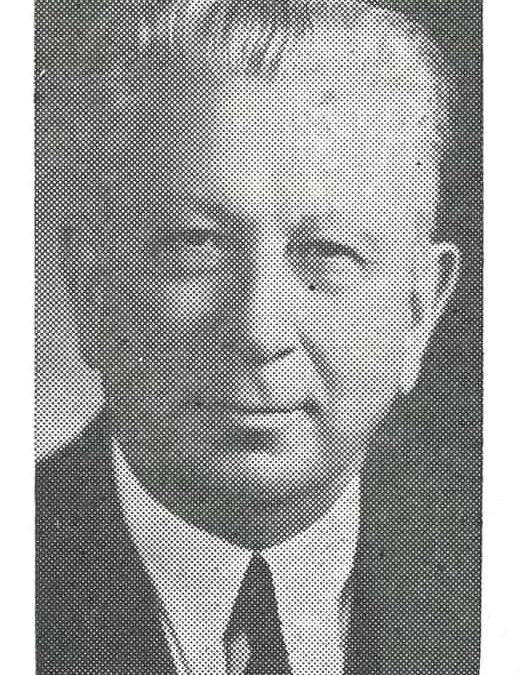 Samuel Taylor Senter, D.D., was born in Bristol, VA, the first of four children born to James H. and Harriet McCrary Senter, longtime members of State Street Methodist Episcopal Church, South (MECS). He received a B.A. from King College in Bristol, TN and studied theology at Vanderbilt University. He began his ministry in 1901 in the Holston Conference and served pastorates in both Holston and Virginia Conferences.

In 1925 Dr. Senter transferred to North Georgia and served Atlanta’s First MECS, where he was remembered by the Board of Stewards in 1956 as forward-looking, kind, and witty—“an ideal pastor in every way.” They recalled his 9-year pastorate as “a truly happy time at First Church” despite the onset of the Depression.

In 1934 he transferred to South Georgia. After a fruitful four years at Savannah’s Wesley Monumental, he came to Vineville in 1938 for a six-year pastorate following Dr. Silas Johnson.  Mrs. H. W. Pittman described him as “concerned about every phase of life of the church.”  Church and Sunday School added membership; “the average attendance was fine.”  Children’s membership classes were held.  The sick, sorrowing, shut-ins and strangers were visited.  The church’s financial affairs were in good order, and mission causes emphasized. He regularly stressed support of Wesleyan College, then in financial stress. Loving little children, he was pastor to the children of The Methodist Home and a Trustee. (In 1939 Vineville and other MECS congregations became simply “Methodist.”)

Dr. Albert Trulock, his successor at Vineville, described him as “winsome and genial” with a “keen and wholesome sense of humor.” He loved beauty, especially in music and flowers, often wearing a boutonniere in his lapel.

All sources remember him as a “superb preacher.” Dr. Trulock wrote, “His commanding personality, his intellectual strength, his fine voice, his deep faith, and his acute spiritual discernment, made the hearing of his sermons an exalting experience.”  Mrs. Pittman in 1952 described his sermons as “so memorable that some individuals in the congregation still remember many of them in detail and speak of them as treasured gems.…”

Because his pastorate included most of World War II, he had a special role as pastor and  encourager during “a time of great stress and strain upon the hearts and the faith of the people.” Mrs. Pittman wrote, “Vineville Church was fortunate to have as the shepherd of the flock this gentle man,” who understood their special needs during “perilous times.”  Each quarterly report to the congregation ended with “a strong statement of his faith.”  One example:  “In these days of testing, we continue in the steadfast belief that our Christian duty ministers to our patriotic endeavors.  We cannot win victory or peace if we forget God…. In the name of our God, let us set up our banners.”

In 1944 Dr. Senter became Macon District Superintendent, followed by a pastorate at Marshallville from 1948-51.  He retired to his home in Atlanta and his Lake Junaluska cottage.  After “a long period of frailty,” he died on Sept. 14, 1956, survived by his beloved wife and 3 precious daughters.  He was buried in Atlanta’s Westview Cemetery, a shepherd and encourager for 56 years!